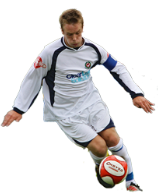 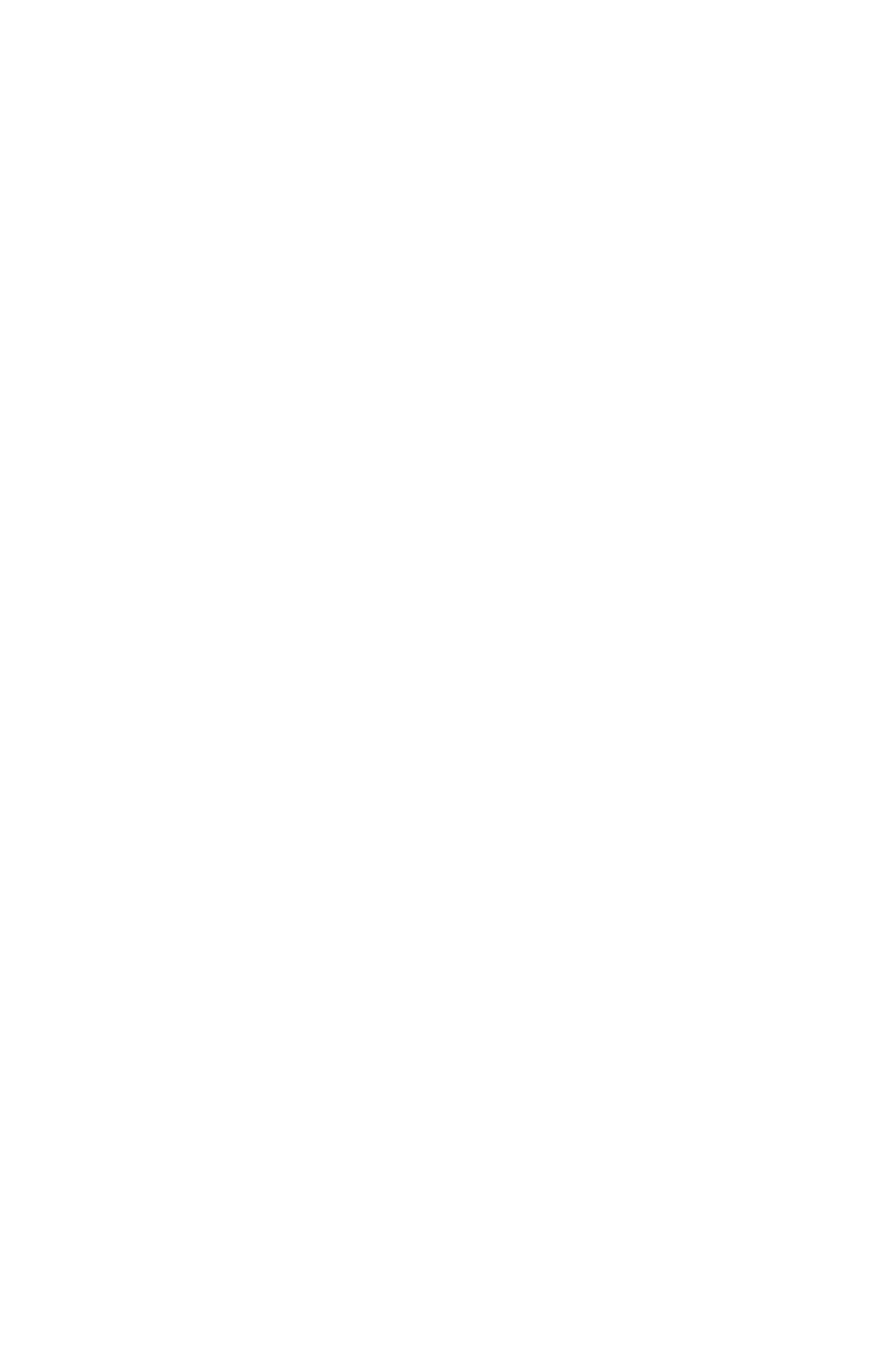 1991/92 saw progress continue on the field as 4th place was achieved coupled with a successful application to join Division 2 of the North West Counties League.

1993/94  a magnificent second half of the season in which 20 out of 22 games were won, resulted in 2nd place and promotion to Division One. Additionally the first trophy was won via a 3-1 victory versus Maghull in the Lamot Pils Cup. Promotion was dependent on further ground improvements resulting in the erection of floodlights and the South Stand, which was granted.

1994/95 was launched under the club's present name, ending in 4th place and defeats in the finals of the Manchester Senior and Carling Cups, progress being maintained the next season via 3rd place and reaching the last 16 of the F.A, Vase losing to the eventual winners, Brigg Town.

1995/96  Trafford had another successful league programme finishing in 3rd place.

2007/08 With the new look management Trafford had one of their most successful campaign’s winning the Vodkat League Championship title by 11 points with a club record of 95 points to be promoted to the Unibond League for a second time after winning the title in 1997. From September 2007 Trafford went on a 29 league game unbeaten run including 18 straight wins which is a League record. Manager Ged Kielty was also voted Manager of the Year & the club won Programme of the Year.

Centre forward Andy Lundy ended the season with 34 overall goals putting him in second place in the League goalscoring chart, but was the League top scorer with his 28 goals in Division One. His ‘sidekick’ Scott Barlow came close behind in fourth overall place with 29 goals.

2009/10 former Trafford stalwart Garry Vaughan in the ‘hot-seat’ as Ged Kielty decided to step down as manager. During seven seasons in the 90’s Garry played a record 305 games for Trafford & is still the overall leading club goalscorer with 89 goals. In his first season as a manager at Unibond League level Garry along with his Assistant Manager Loz Greenhalgh guided the club to a creditable 12th place in the First Division North & were finalists in the Manchester County FA Premier Cup.

During this season striker Scott Barlow scored 21 goals to became the joint overall club top goalscorer with a total of 89 goals in his three seasons at the club along with Manager Garry Vaughan.

2010/11 Trafford had a poor first half of the season, then Manager Garry Vaughan made a number of personnel changes including bringing back former Assistant Manager Wayne Goodison & the clubs fortunes changed finishing in a respectable 14th place.

2011/12  Trafford didn’t have much luck in any of the cup competitions & had a rollers coaster season in the First Division North finishing in 12th place.

2012/13   In Garry Vaughan’s fourth season as Manager along with his Assistant Wayne Goodison they led  Trafford to promotion to the Evo-Stik League Premier Division, after winning the First Division North Play-Off final against Cammell Laird 4-2 on penalties aet on their ground.

2013/14  Trafford playing in their highest ever level of football in the Evo-Stik League Premier Division the club had a very successful season finishing in a very impressive 10th place & won the Manchester Premier Cup against Football Conference side Hyde at Bury FC’s Gigg Lane.

In May 2015 Trafford appointed former FC Halifax & Chorley Captain Tom Baker as the club’s new Manager. After in mixed first half to the season from mid-December Trafford’s form turned for the better with only five defeats in twenty two league & cup games finishing the season in a creditable 8th place in the Managers first ever season as a Manager.

After an impressive first season as Manager Tom Baker along with & his assistant Manager Chris Shuker took Trafford to an improved sixth place in the First Division North missing a play off place by just two points.

Trafford had another successful season finishing in 6th place for the second consecutive season, runners-up in the Manchester Premier Cup.

THE STORY SO FAR AT SHAWE VIEW 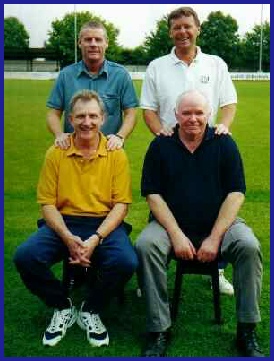 The club was formed in summer 1990, being the brainchild of David Brown, John Harrison, David Law, and Bill Whitten under the name North Trafford, sharing Shawe View with Trafford Borough Rugby League Club.

After initially being denied entrance, a late withdrawal resulted in the club being invited to join Division 2 of the

Mid-Cheshire League for 1990/91 season. The first game at competitive level versus Macclesfield College was won 3-1,leading to a finish in second place, and promotion to Division One.

As a bonus the club obtained sole tenancy of Shawe View via a 30 year lease, and substantial ground improvements were undertaken.

1990/91 Manager David Law took North Trafford to 2nd place in the Mid-Cheshire League Division 2 & were promoted to the Division One. 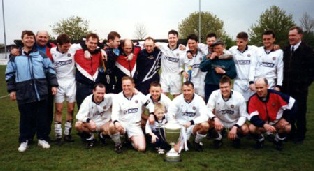 1996/97 was undoubtedly our most successful, winning the N.W.C.L. and gaining promotion to Division 1 of the Unibond League but losing out in the finals of the Manchester Senior Cup and the League Cup. David Law who had managed the club since inception was named N.W.C.L. Manager of the Year, and the Reserves won the N.W.C.L

1997/98 saw an indifferent start but the club finishing 12th, and a further trophy was won, the Unibond First Division Cup, beating Lincoln United 3-1.

1998/99 started with the appointment of Mark Molyneaux as assistant manager to David Law, taking over the reins in the December, and guiding us to a final place of 14th.

1999/2000 Manager Mark Molyneaux along with his assistant Wayne Goodison guided Trafford to victory in the Unibond President’s Cup Final beating Whitby Town in the 2nd leg on their ground.

2000/01 Trafford finished the season with thirteen games unbeaten run placing them in 5th place, their highest ever league position in the club’s eleven year history.

2001/02 saw Mark Molyneaux resign to take over at fellow Unibond First Division side Chorley, with the club finishing in 15th place. Trafford then appointed Joey Dunn as the new manager.

2002/03 the results didn’t come Trafford’s way and at Christmas the club decided to release manager Joey Dunn & appoint the vastly experienced Mike McKenzie who has won so many honours as a manager in the Unibond League. Sadly results still didn’t come & Trafford were relegated to the North West Counties League

2003/04 By October Trafford decided to part-company with MikeMcKenzie after finding themselves in 19th position in Division One. A month later Trafford appointed 28 year old former Leigh R.M.I. Reserve Team Manager Danny Johnson as the new manager. Within a couple of weeks the results changed and Trafford began to improved their league position.

2004/05 By the end of season Danny Johnson’s young entertaining side finished in 16th position with 50 points. Trafford didn’t have much joy in any of the cup competitions but finished in an improved 12th position on 56 points. While the Reserve Team won their third County Cup in four seasons by winning the Manchester F.A. Trophy.

2005/06 was Trafford got off to a flying start in the League and had a good run in the FA Vase, but sadly couldn’t maintain their league form throughout the season finishing in 14th position.

2006/07 saw Trafford finish in 5th place in the NWCL Division One the club’s best campaign since 2001 when they finished in 5th place in the Unibond Division One. The season included a good run in the FA Cup, two players in the top 20 goalscorers in the NWCL, with Glyn Barker in 6th place with 34 goals & Troy Hayder in 16th place with 20 goals, & a end of season run of 17 games unbeaten to round off a marvellous season. At the end of the season sadly manager Danny Johnson decided to move up to the Unibond League with Ashton United, with our player Ged Kielty becoming Trafford’s ’new’ Player Manager, assisted by Lee Southwood & coached by Tony Coyne. 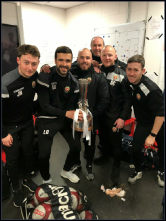 In his fourth season at Trafford Manager Tom Baker crowned the season by winning the Integro League Cup for the first time in the club’s history beating League Champions Farsley Celtic in the final.

Trafford's form was mixed during the season & the Coronvirus cut the season short in March with Trafford in 9th place & a place in the Manchester Premier Cup Final against FC United. At the end of the season Manager Tom Baker resigned & replaced by his assistant Danny Caldecott.